The 2015 Lightning Strikes Adventure Race took place one week after our first race of the season. We knew this would be a great opportunity for us to qualify for nationals and potentially nab the $400 discount for being the top team to qualify. Still, we didn’t know what the competition was going to be like until we arrived in Mt. Carroll, IL on the afternoon of Saturday, March 21.

Upon arrival, we noticed the camp had changed a bit since our last visit for 2014 Thunder Rolls, as we struggled to navigate through a new, half-built parking lot and the subsequent piles of dirt strewn about. After squeezing into a nearly vertical parking spot, we checked in and started getting our gear organized, then went in for dinner and two hour-long talks that were part of the race camp Gerry Voelliger runs, which we took part in last year. It was a bit boring to sit through the same lectures, but we were stuck because we knew the race briefing was scheduled to take place immediately afterwards.

Finally, at 10 pm, Gerry started the briefing. We knew there would be no canoeing and the course was pretty straightforward - a bike leg out to the Palisades, followed by a 12-point orienteering course, and then back to camp for the ropes section. The plotting didn’t take long, as we wouldn’t get the O-course map until we arrived in the Palisades, so we headed off to bed by midnight. Starker fell right asleep in ole Sketchy, but Kate and Cliff were stuck in a cabin with lots of other teams and didn't get much sleep. The morning took forever to come, even with a 5 a.m. wake-up call. However, at 4:30, one of the teams in our cabin woke everyone up with their loud alarm and preparations, and one member aubidbly saying, “I guess no one else is doing the 8-hour race,” was just too much for Cliff. He said, “We are, we just didn’t feel the need to wake up so early.” But what he meant was, “Calm the *&^% down.”

Once we had gotten up and ready, the start was calm enough. After the pre-race photo, the national anthem and Gerry firing the start gun, and Team TMZ took off never to be seen again. They finished 1.5 hours in front of everyone else for first place overall. As for Strong Machine, we sprinted a quarter-mile down to the river, grabbed our bikes and ran them back up the hill into camp, then pushed hard to get a little gap over the field. ​ 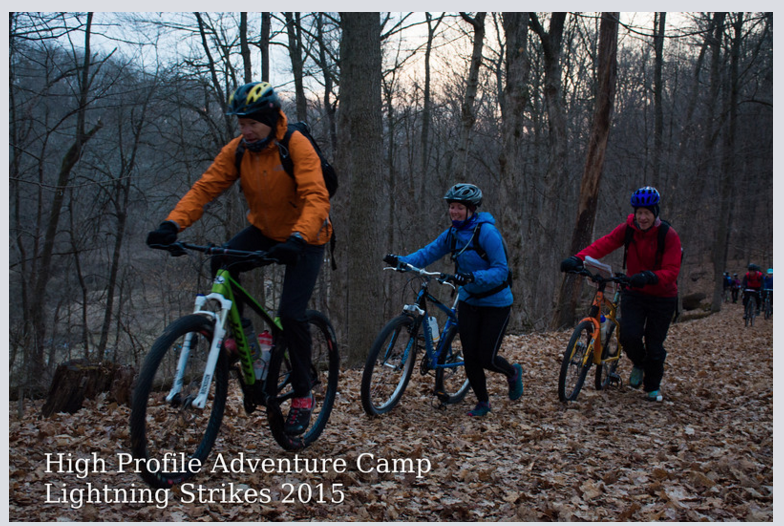 Starker proving his mettle on the hill on the way out of camp on the frozen roads of central Illinois in March.
Out of camp, we ended up riding with team from Loyola College doing their first adventure race. We leapfrogged each other through a couple of bike checkpoints, then arrived at the TA together and got our map. Kate took charge and got us a bit of a lead going into the first checkpoint, but the Loyola team took a better line and got there first. Fortunately, they guided us right to the CP. We ran right behind them for the 10 minutes it took to get to CP 2. On the way, we tried to jump over a stream but Kate didn’t make it all the way over, and her foot sunk in up to the calf in mud. She was a bit upset and so we tried to move even faster to dry her off and warm her up.

We got to CP2 about two minutes behind the Loyola team, and they maintained their lead through CP 3 and 4 (the first of three bonus CPs, which we found via maps hanging on the CP before, ie. CP3), but CP5 was a difficult one, located in one of many similar-looking reentrants on the side of a big hill. We had a bit of difficulty finding it ourselves, but we saw no trace of any other teams. Our best move was going directly from there up the side of the next mountain, instead of around on a hiking path. We took that route and estimated it saved us 10 minutes and gave us some separation from the Loyola team. We quickly located the next CP, then hid our movements from a couple of teams searching above by switching to a different reentrant as we headed for CP7. CP7 was located down a long draw, and as we descended, Starker said he thought he saw it before we grew gloomier and gloomier about the flag being where we thought it was. But just as we were about to give up and acknowledge we had wasted 10-15 minutes searching for it, Starker said he saw it for sure, and he found it lurking behind a downed tree. That CP had a map for CP8 (bonus CP #2), which was an easy one to get as it was on a spur. We saw a bunch of teams coming our way, 1-2 CPs behind us, but we assumed they had skipped the optional CP and we were right for most of them. 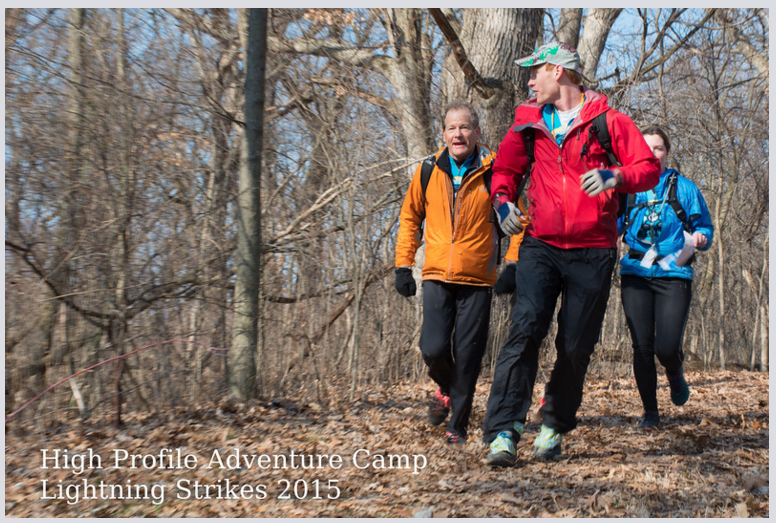 Working our way through the o-course. 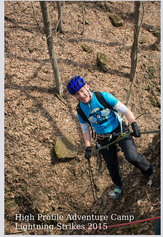 On the rappel near the end of the race.
CP 9 was another spur, and CP 10 was up the next hill in a pit. We found both easily, then went for another optional CP, CP 11, and in order to get there, we had to take a sizable detour down a power line slope in order to avoid some thick and steep forest.  We found CP 11 with no problem,  as it was in the same place a CP had been located at Thunder Rolls the year before. On our way to CP 12, we realized on a long hike back up to the ridgeline that we were one point away from nailing the orienteering section. CP 12 was on another spur and we found it easily, as a couple of other teams led us right into it, and then we were running back to the TA and our bikes. Matt and Dawn from DragonAZ were volunteering at the TA, and they let us know we were the second team in with all the points. That was pretty awesome motivation!

On our 10-mile bike back, we pushed it up a few steep hills, stopped for a moment to eat something, then continued into a stiff headwind for the last four miles. We arrived back at camp, did a climbing wall challenge, ran over to the cliffs to complete a big zipline over the river, then had a moment’s trouble figuring out how to get to up to a point that looked like it was on the side of a cliff. We scrambled up a steep ridge and traversed over to the CP, then crossed to the rappel, where Cliff almost killed the belayer by accidentally knocking off a loose stone. ​He yelled before it fell and the belayer ran to safety.

Belay complete and no competitors in sight, we headed over to the luge, where we all adamantly refused to participate after last year’s annihilation (Cliff had a bad crash and ended up with a head injury and without a left thumbnail). The volunteers were fine with it, and so we ran up to the finish line, got our photo snapped with Gerry and learned we had finished second place overall in the 8-hour race! 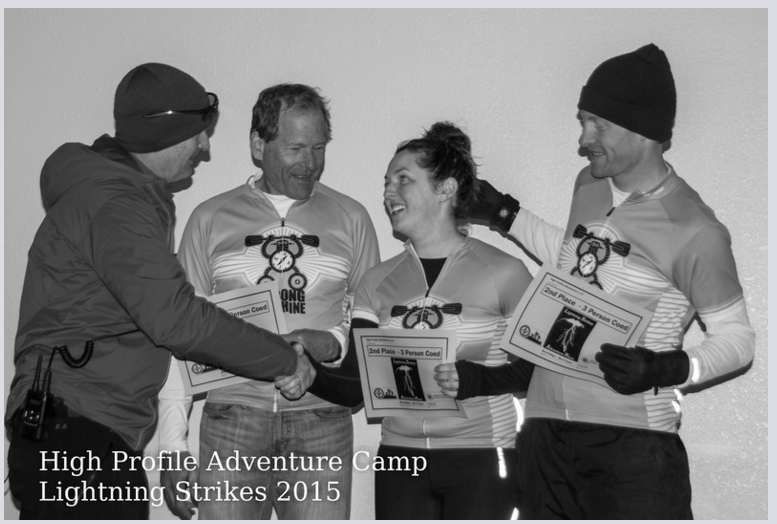 As we refueled on baked potatoes, we talked a bit with TMZ and they turned out to be really nice folks. We were really thrilled to get our 2nd place certificates, and the only thing that upset us a bit was that the first-place teams in every other category received all sort of free schwag, including Osprey packs and platypus hydration packs, and all we got for 2nd in the premier category was a certificate even though we finished in front of all of them except for TMZ. But the feeling of having run a nearly flawless race soon won out and we celebrated with a big meal in Mt. Carroll and a karaoke-filled ride back to Rockford in the Sketchmobile. 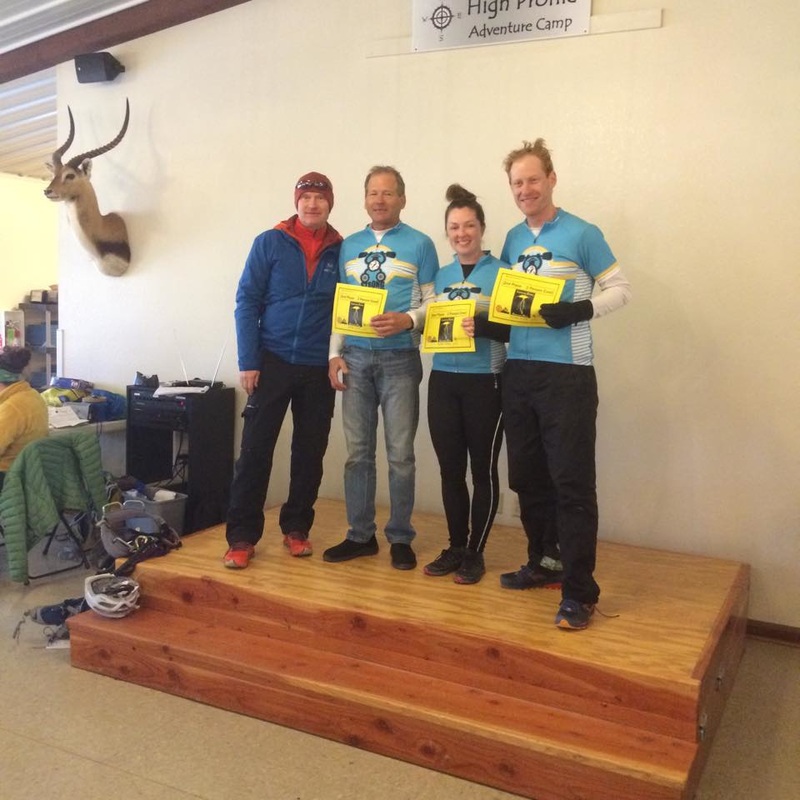