Bringing up the middle

As Kate was out of town and Starker had committed to a century bike ride in Rockford, Cliff headed up to Middleville, Michigan, to race the 12-hour Summer Fury with alternate teammate Malcolm, who lives in nearby Lansing, where he's getting his Ph.D. in forestry.

Leaving early in the day on Friday, Cliff met Malcolm in Yankee Springs State Park following a six-hour drive. We checked in together and received the pre-plotted race maps, then went to pick up some dinner. One disgusting pizza later, we were back in the park and setting up our gear. We got through our prep work by midnight and crawled into the Subaru to get some sleep. But 3,000 mosquitos had gotten inside the car, and it was incredibly hot and stuffy, making sleep impossible. At 1:30 a.m., Malcolm crawled out of the car and into his truck, finally managing to grab an hour’s worth of sleep. Cliff got a little more, but a 4 a.m. race start meant we did not get much rest before our phone alarm went off at 3:15 a.m.

The race started in complete darkness with a half-mile run down a road to a trail. Malcolm found the first point  as we traveled as a pack with three-quarters of the 24-team field. Then the difficulty began. Most teams charged off to the west too soon into a swampy area, missing a land bridge that the top teams nailed. 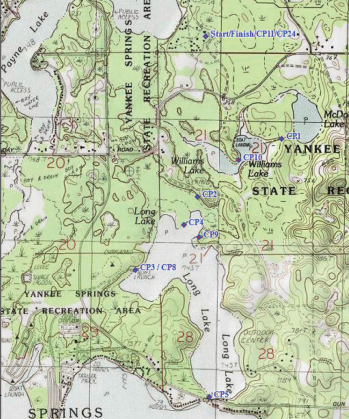 The first trek (Start to CP1, then the swamp to CP2, then a boardwalk and trails to CP3). You can also see most of the paddle (CP3 thru CP8).
We were one of the teams that went too early, and we found ourselves thigh deep in swamp, moving less than one mile per hour. At one point, we were stuck on a swampy piece of high ground with swamp all around us, as we searched in vain for an opening to the east. Half an hour of confusion and swamp trodding later, we made it out the other end, and sprinted into the TA about 30-40 minutes behind the leaders. On the upside, we did make some good friends with team 42nd North, an all-female team, as we worked together to get through some of the nastier parts of the swamp.

Our paddle on the lake started before dawn and went through a few lakes and a tunnel. It was pretty easy to find all the points on the lake because all the teams had glowsticks hanging on the bows and sterns of their canoes and we could follow them right into the CPs. Our paddle split was 1:20, which was only about 10 minutes slower than the leaders. We got back as it was getting light, and made our way through three land checkpoints. The highlight (or low point, for Malcolm) was a 100-foot swamp swim, with Malcolm screaming like a little girl the entire time as he worried about snapping turtles taking a bike out of his junk. Cliff found an ingenious method for this challenge, as he used a dry bag to seal his stuff inside and as a flotation device for the swim. On the other side, it was a quick mile run up to the TA/start/finish, and a long transition as we cleaned off the sludge from the swamp and got ready to head out on the bikes.

The bike leg, the middle point of the race, was a backbreaker for us, as we encountered mechanical issues, map troubles and difficult terrain. The first few miles took us through the trails of Yankee Springs State Park, which the three race directors said would be an easily navigated stretch of fun singletrack. But to those unfamiliar with the terrain (i.e. us), the map was useless, as dozens of side trails were not marked, and it made navigation nearly impossible. 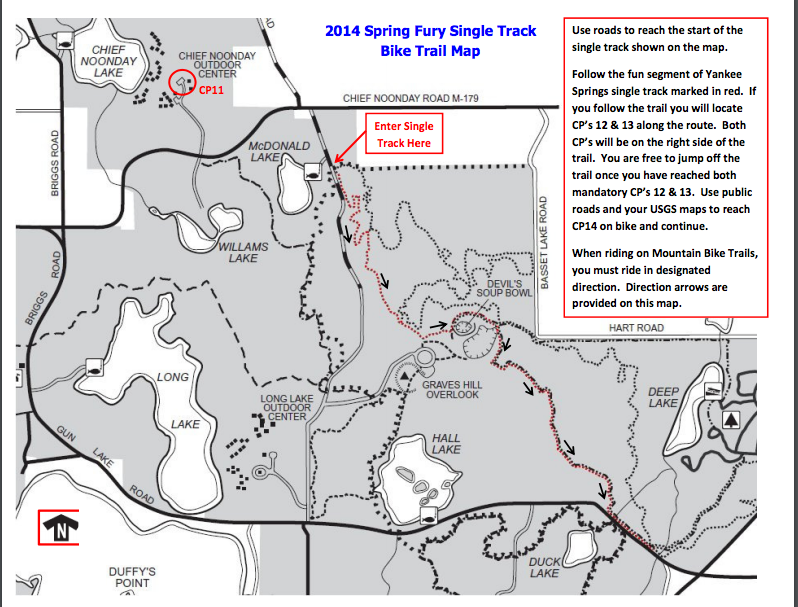 The bike map looks straightforward but there were at least six side trails not marked on the map that created a lot of confusion for us.
We had to stop at every Y-intersection to check the map, which didn't help much, and we must have dropped at least 20 minutes in this three-mile section of biking, repeatedly losing the trail, realizing we weren’t on the main path, and returning to it. Emerging out on the main road, it became clear that the names on the map didn’t align with the street names we were seeing in real life. That led to us missing a turn-off for a double-track road by about a mile. We backtracked, turned onto the sandy trail and then Cliff’s chain broke.

Without Malcolm, the race would have been over, as Cliff had no idea how to fix a broken chain. Fortunately, Malcolm had a QuickLink with him (this discovery would lead to Strong Machine earning the Spirit Award at the USARA National Championships later in the year, as Cliff began carrying QuickLinks in every race). The chain fix took 30-40 minutes, with mosquitos ravaging us the entire time.

We got underway again, but the roads were filthy sandy gravel and the going was slow. Finally, about 10 miles into a 22-mile bike, we hit some decent roads, and started to make progress until...Cliff chose the wrong power lines to check for a CP, and we lost another 15-20 minutes searching in vain, until realizing our mistake and going to the next powerline crossing just a half-mile further on. ​ 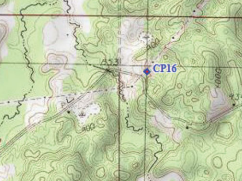 This zoom-in on the map (1:24,000) shows how we got confused at CP16. Coming in from the left (west), we were looking for power lines. We started searching at the first intersection instead of the second. Looks so obvious now...
We spent most of this bike ride with a couple of other teams (including Kevin Randall and Mike Wilson from Goin’ Postal), until pulling away from them and making good time up to the paddle put-in in downtown Hastings. The race director met us there and let us know we were pushing the cutoff for the race. Malcolm wanted to keep pushing, but Cliff thought the more strategic decision, given that so many teams were struggling with the cutoff, was to take the short-course and try to get as many orienteering points as possible. Instead of a 15-mile paddle, we did just 8 miles down a twisty but fast-flowing river, clogged with drunken tubers who looked at us quizzically as we blew past them. We hit one CP, then got off the river at a rafting/tubing place, where we picked up our bikes. The ride to the TA/start/finish was on a hot, trafficky and hilly road, and Malcolm used his powerful biking legs to try to get this section over as quickly as possible. We arrived and made a fast transition to orienteering, and begin nailing the section, steering directly to every CP without any major problems. It was a little strange to have our first orienteering section come so late in the race, and with not much at stake, but we had fun finally not screwing up a section royally. We finished 22 minutes before the 4 p.m. cutoff (which in retrospect was too early to come in), and watched with amusement as several teams (including Tizoc and Jens from Michigan Racing Addicts) sprinted in, having cleared the course with just seconds to spare. We ended up with 8 CPs out of 20 on the orienteering, and were amazed that three teams managed to clear the course.

The race ended at 4 p.m., and we cruised out afterwards to Grand Rapids, where we had a couple of beers at the famous Founders Brewery. We then headed back to Lansing to sleep at Malcolm’s place. A frustrating experience overall, but a nice day spent outside and a good ego check for Cliff, especially navigationally but also in terms of mechanics and keeping your gear in good shape (now he will always check his chain before every race).
MORE STORIES