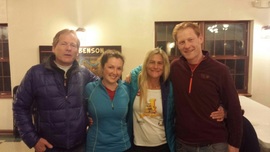 Meeting AR legend Robyn Benincasa.
We signed up for the Lightning Strikes camp as a way to back-door our way into adventure racing knowledge. Even though we had already done a handful of races, we had missed this camp last year, and with it, our opportunity not to face a major learning curve in our first year of racing. On the flip side, it was a lot less intense of a commitment (and a sell to Kate and Starker that the weekend and $300 price per person would be worth it) since we had raced before and been to the YMCA camp where the camp is held (in our Thunder Rolls 2013 experience).

We arrived Friday, put up our tents in the parking lot, and after check-in, went down to check out the ropes. We got our fill of rappelling, ascending, and Tyrolean traversing, then went to dinner, where we enjoyed a better-than-expected taco dinner. After dinner, we attended the advanced navigation clinic, which really helped us understand some of the finer points of nav, and confirmed the merits of a lot of what we had figured out on our own in 2013.

The next day, we were up early to head out for a day of navigation in the Mississippi Palisades. Feeling confident after finding CP#1, Kate promptly led us off the map and we wandered around for an hour, assuming incorrectly the road we were on would meet back up with our intended destination. We finally quit on that idea and retraced our steps back onto the map.  Thankfully, it wasn’t a race, and we laughed it off, hoping for better luck/skill the next day. We hit up Subway for lunch then headed back to camp. Had a scary moment when I found my bike brake cord had been severed on the car ride down, but fortunately the camp director, Gerry Voelliger, allowed me to borrow one of the camp's bikes, which was a big old mountain bike but at least responded to requests to brake. With crisis averted, we headed to dinner featuring a talk by our hero, Robyn Benincasa. She told some great stories of her Eco-Challenge experiences and got us amped up for a season of racing. After the lecture, we saw her in line for food, and she tried her best to convince us to do the USARA National Championship race. We laughed out loud at that one. A 24-hour race when our last 12-hour race ended with us finishing 1.5 hours late and in last place? Good joke (the joke was on us, as we ended up participating in the USARAs later in 2014). We got to bed rather late after Gerry’s race preview (in which he said there would be no canoeing due to freezing temps) and getting the maps ready, and we were up early for a 7 a.m. race start. 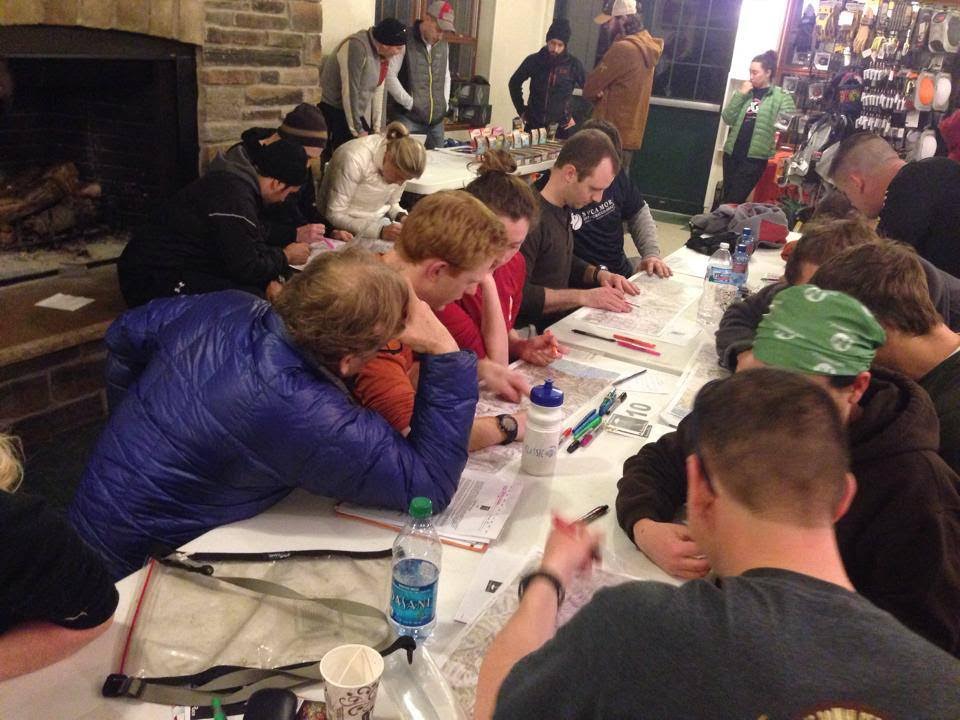 Plotting our course the night before the race.
As had been promised the night before, the race started with a bike ride into the town of Mt. Carroll, and the map coordinates took us right to the edge of town, where we found Robyn Benincasa welcoming us into a haunted house. We spent the few minutes in the house trying to rub feeling back into our frozen fingers (the morning was definitely at frost levels), and trying to figure out whether to enjoy our time in the house or press through with the line of other adventure racers pushing to get through as fast as possible.
​
The last part of the haunted house CP involved slipping down a two-story slide, which was a hoot. We ended up outside right by our bikes, and remounted, with Kate getting a helping pushoff from Robyn (which Kate still brags about to this day). We headed back past camp, all the way to the Palisades, then found ourselves on a mandatory six point O-course, which we did with about eight other teams around. The highlights of this section included Starker leading an old man around a dangerous cliff face in order to throw him off, and Starker trying to use his newly purchased hunting whistles to try to round up the team. We also found ourselves at the top of a several hundred-foot cliff, with Cliff telling everyone it was too dangerous. After a few minutes of looking for the mysterious CP, we headed down a steep decline to a cave at the bottom of the cliff, where we finally found the CP. Inside the cave, we suspended our race mode for a second as we realized we were in a really cool spot, and after fully appreciating the moment, we punched the CP and moved on.

Our quick solve on the cave CP saved us about 30 minutes on the teams we had been racing with, but we lost it all on the next checkpoint, when we climbed a really steep cliff face looking for a checkpoint that turned out to be on the neighboring (and much less steep/dangerous) hill. Finishing the O-course, we had several more bike points around the Palisades before heading back to camp. 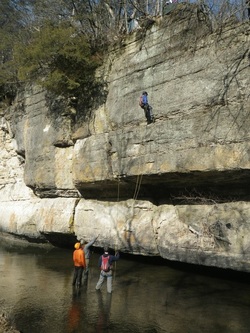 At the rappel.
At the end of the ride, we caught up to a three-person coed team, with one guy struggling on the last big uphill near camp and the extremely intense woman teammate looking super angry at him. We got back to hit Gerry's famous ropes course, but we missed the first CP, which was in an outcropping on the way to the Tyrolean traverse. The team with the super-intense woman team passed us, and ended up just in front of us as we did the traverse, then a zipline (very fast and fun), and then went over to the rappel (which the volunteer said Starker did faster than anyone else). The rappel ended in knee deep, freezing water, and we were all obligated to stand in it for a long-ish period of time while belaying the person who came after us.

With frozen feet, we made it over to the tunnel/slides, and Kate and Cliff decided to race down, which turned out to be a very bad idea. The slides were a lot faster than expected, and Kate crashed out first, then Cliff lost his sled after hitting a bump inside the tunnel and missed hitting Kate by just a few inches, but ripping part of his thumbnail off in the process of crashing, and hitting his head, snapping his neck back. Groaning and writing on the ground in pain, Kate yelled for Cliff to get out of the way of Starker, who was about to pop out of the first tunnel. With a surge of adrenaline-fueled energy, Cliff lunged out of Starker’s way, barely preventing a very dangerous moment. 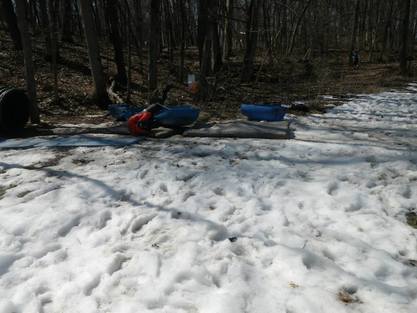 Cliff, mid-crash.
Following a few minutes we took to regain our composure, Team Strong Machine slowly made its way up to the finish line, which was somewhat anticlimactic after the near brush with a serious accident. Baked potatoes at the finish line helped calm the team down, and then, 30 minutes later, realizing we had taken third place in the co-ed division (and would have had 2nd if not for the one nav error), salved our wounds. This was our first podium and qualified us for the USARA National Championships. The race turned out to be a lucrative one as well. After we decided to accept the invite to the USARAs, we found out that because the other teams decided not to race the championships, we would get the regional sponsorship, a $400 value! Yay for Gerry Voelliger and Lightning Strikes!
MORE STORIES