Our second adventure race, the 12-hour Stubborn Mule, measured up to be a much bigger challenge than the six-hour Stubborn Fool had been. Fortunately, it was also much warmer for this race than the Fool, which took place in early April. After a team dinner in Madison (I believe at Sardine?) on Friday, we headed up to a hotel in Wausau, still about 40 minutes south of the race start in Tomahawk. We took two cars, as Kate and Cliff were planning to take a week after the race to do a kayak tour of the Apostle Islands. As we jostled for position on the highway, Kate and Cliff passed Starker and were highly amused by his driving style - bolt upright, with huge earphones on so he could listen to his book on tape. And he was driving his not-so-brand-new, rusted-out gold minivan, which we dubbed the "Sketchmobile." More laughs ensued as we pulled up to the cheapest motel in Wausau with two cars loaded full of gear at midnight, then proceeded to empty half of the cars into our rooms. A very creepy-looking dude was manning the front desk, and he checked us in without asking what we were up to. Four hours later, when we emerged from our room wearing mostly lycra, he was still there and he gave us the biggest double-take in history as we walked out the front doors of the motel. 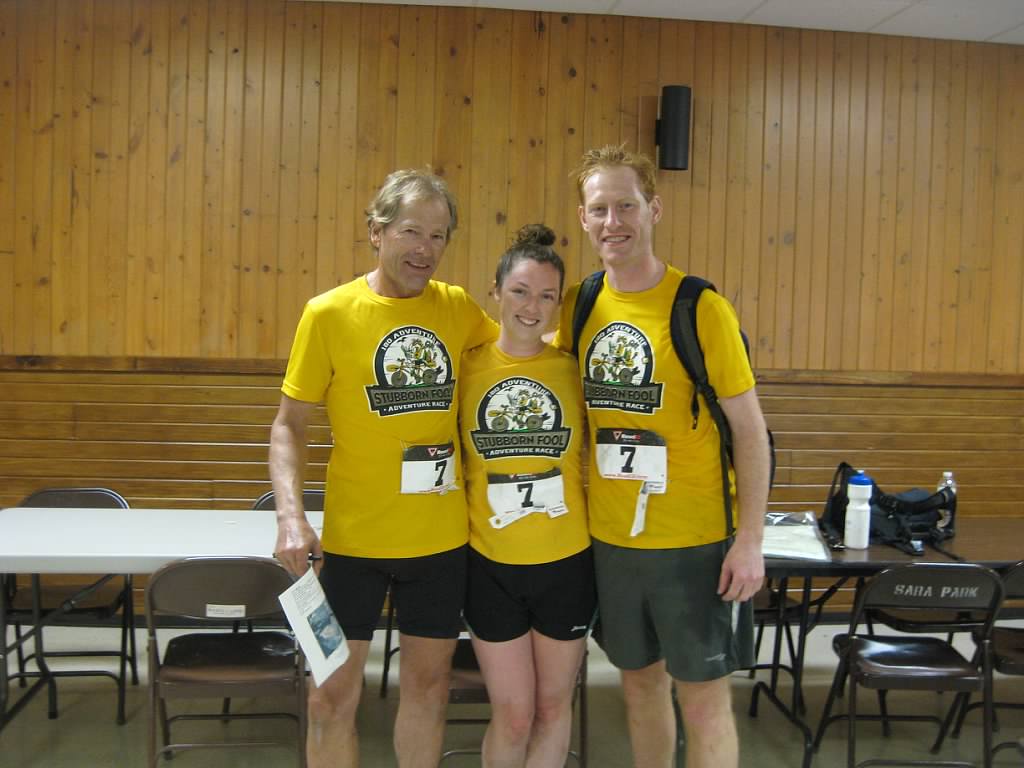 At the start, ready for anything.

We arrived at the race start at the Sara Park Shelter in downtown Tomahawk at around 5 a.m. and listened to the race briefing, which to our newbie ears was more confusing than enlightening. We were told that there was an orienteering section to start the race, then a bike-o, and that we would receive our maps after completing a special challenge at the beginning of the race. The race started at 7 a.m. with a strange compass/running combo, requiring you to head on one bearing for 400 feet, then another bearing for 200 feet, until we found a volunteer withour next map.

We headed off with most other teams for a ⅓ mile run to what we thought was the first volunteer/CP, but after waiting with about 20 other teams, we were told we were in the wrong spot. So we backtracked, and now that we were off our bearing, had absolutely no hope of recovering except by going back to the start, but we instead of doing that, we followed all the other teams behind a cluster of trees, found another waiting volunteer (this time the correct one) and got our map. 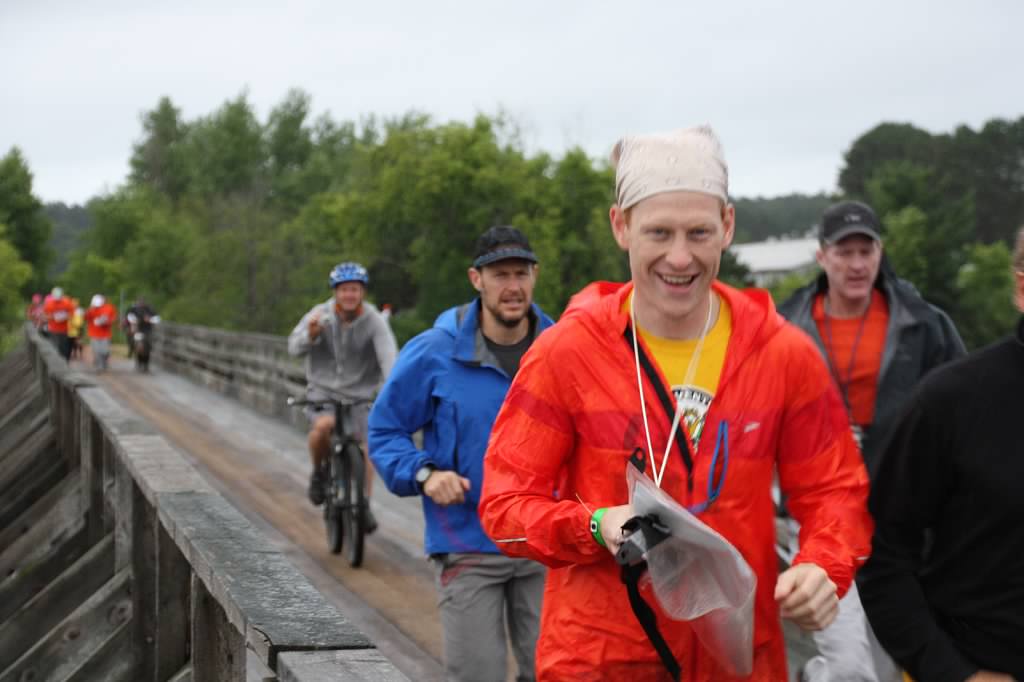 On a neat rails-to-trails bridge on the opening section of the race. Cliff smiling to hide his horror that we are already lost.
Our new map showed five orienteering points in Bradley Park, but it gave no directions as to where Bradley Park was from where we were. It also wasn’t clear what we were supposed to do at that point, as the volunteer had given us no directions as to whether we needed to do a punch or head back to race HQ...We stumbled all the way back to HQ before realizing all the other teams had just headed off to Bradley Park, so we figured out where that was by looking on our big race maps, then headed across a railroad yard. We immediately thought it was weird that we were racing on live railroad tracks, but it was clear that a bunch of other teams had gone through, and we caught up with some of them on the way, so we knew we weren’t the only ones doing it.

When we arrived at Bradley Park, we had little trouble finding all the O-points. The coolest one was out on an island in the middle of a small lake. To get to it, we tried jumping a small channel but ended up mostly soaked up to the knee. There was some confusion among the gathering group of racers in the area, as there were a bunch of other o-points up for the 30-hour race that that 12-hour racers did not have to get, but the codes were not made clear anywhere so we weren’t sure which points were correct. We double-checked with a couple of other teams, who also weren’t sure what to do. Eventually, we just assumed we had it right and headed out of the park and back to HQ back through the railyard. Upon our return, we saw two cop cars sitting outside HQ and two police officers talking with race director Paula Waite. We didn’t want to get involved so we grabbed our bike-o map and got out of there. We had an idea it had to do with us traveling over the railroad tracks, which were very much in use throughout the race.

The bike-O was back in Bradley Park, but we took the paved road both for expediency and to avoid any litigation. Since the race began, it had been raining lightly and this made the mountain biking a bit treacherous. Furthering our frustration with the maps and lack of explanation about what we were supposed to do, the bike-o was a line-o, meaning we just had to follow the line drawn in on the trail map and find the three checkpoints hidden somewhere along the way. We took it slowly, as Kate didn’t have much experience mountain biking, and it was very slick with a lot of exposed roots. We found all three points about halfway through the recommended route, but then grew frustrated once again as we weren’t sure whether we could skip the rest of the bike. We decided to follow the whole route, in the process getting passed by a team that would become our arch-nemesis in this race and future races. This team, which featured a very cute 11-year-old, was clearly capable of outdistancing us on a mountain bike but we were faster on the roads. This meant we saw them multiple times throughout the course of the race and we knew we were competing against them in the co-ed premier division standings. 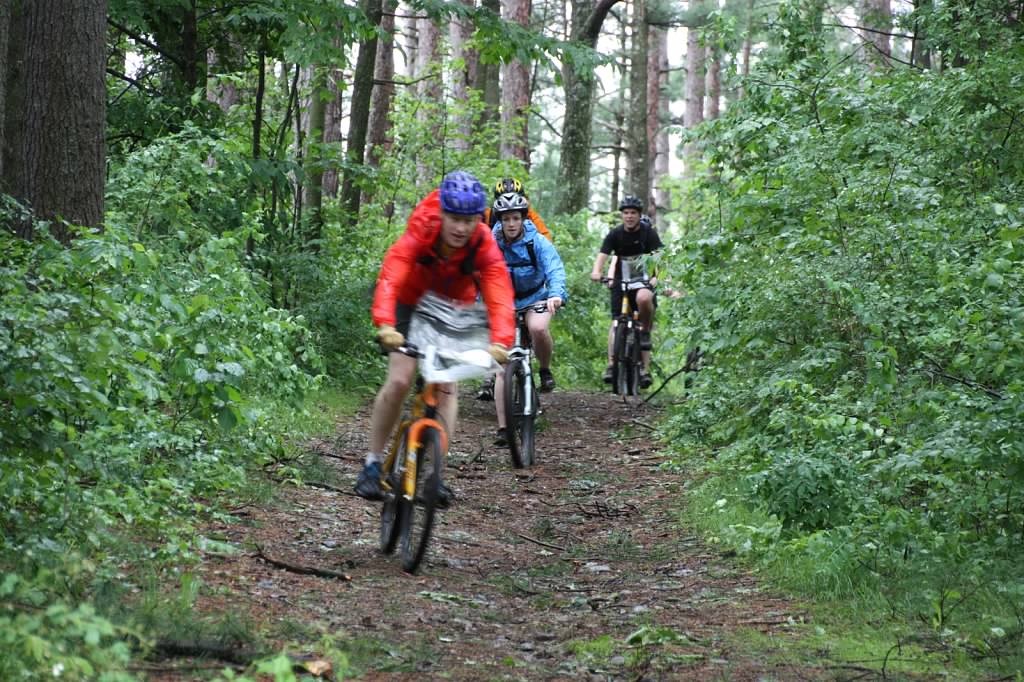 Riding the fun but slippery trails in Bradley Park in Tomahawk.
After wasting about 20 minutes doing trails we didn’t have to do, then another 20 minutes or so lost due to Cliff’s navigational error on the confusing trails before Kate steered us right, we got back to HQ. We received our maps for the rest of the race and settled into the first UTM plotting we had ever done in a race. Fortunately, we had practiced extensively, so we weren’t completely overwhelmed. It took about 30 minutes, then we remounted our bikes and headed out on a long ride out to Otter Lake, a 13-mile ride on mostly paved roads, until the last two miles when it turned into very muddy dirt. 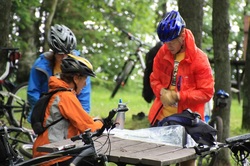 Arriving at TA3, the start of the 16-point O-course. 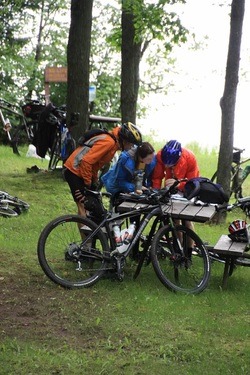 Re-checking our shaky plotting at the start of the big O-course.
We arrived to a swarm of mosquitos and most of the bikes in the race. Clearly we were near the back of the pack. Still, we took time to eat turkey and hummus sandwiches we had made the night before and carried with us in our backs as we took more time to re-plot our points, double-checking them to ensure they were all correct. ​​
Even with our concerns about the accuracy of our plotting, we set off on this 16-point o-section with high hopes. As it turned out, we were naively optimistic. We began our search in a section of the map containing a cluster of four CPs. We wandered up hills, along ridges, and through swamps without finding anything. After searching with less and less hope for about an hour, we gave up. The 1-24,000 maps, ravenous mosquitoes, and thick foliage combined to create navigational difficulties we had not expected. Nor were we equipped to deal with them. Cliff and Starker were wearing shorts and a t-shirt and were being decimated by the bugs. Putting on a rain jacket to ward them off, we started to overheat. Kate took over the nav after Cliff threw up his arms in surrender. We finally were able to find one point after teaming with Brett, a solo racer. We went searching for another but gave up on it, then headed back to the TA along a lake, where we found a second point. Gaining hope, we changed our minds about quitting and set our sights on a nearby point, which we found hiding at the top of a hill after about a 20-minute trek up through dense thorns. We tried to find another point, heading downhill then back up another hill, bushwhacking the whole time, but gave up after not finding it where we thought it would be. Arriving back at the TA, we realized we still had a lot of time on our hands, so we went out searching for a point that was right near the TA. It still took us about 20 minutes to find, but we found it hiding in thick underbrush near the top of another hill. We called it a day after that and went back to the TA a final time to get on our bikes. As we got out, Team Elkbones ran into the TA, explaining to the volunteer that they had gotten all the points. We were equal parts jealous and impressed.

As we began our bike back, the sun came out and it actually got a little warm on the road, which dried out our sweat-through T-shirts. We got back to HQ with about two hours to spare and transitioned into a canoe, where we sped out to get all five canoe points. The canoe went from Sara Park all the way to Kings Dam, about eight miles out and back. We passed all the top teams out on the paddle as we were going out and they were coming back, which was fun to see. We arrived back at HQ with plenty of time to spare, despite Cliff’s worries about the cutoff.

While we waited for the straggling teams to finish, we ate some good food and talked with race director Paula for a while about how hard the nav was. We really had no idea how well we had done, but we found out by way of our low overall place in the standings that orienteering is by far the most valuable discipline in AR, and that we should have spent more time orienteering and less time paddling. Even so, we didn't really regret leaving the bug-infested, swampy O-course for the beautiful and breezy lake paddle. 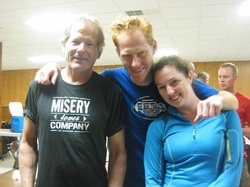 Celebrating post-race.
After the awards ceremony, we headed off to Rhinelander to spend the night with our friends Ben and Becky, who feted us with piles of food and cold beer and wine. We wanted to be fun guests but we just didn't have the energy and we all ended up asleep before 10 p.m. There's another lesson we learned this race: adventure racing is pretty exhausting!
MORE STORIES